How to Maximize Your Conference Networking Experience with Chris Browning 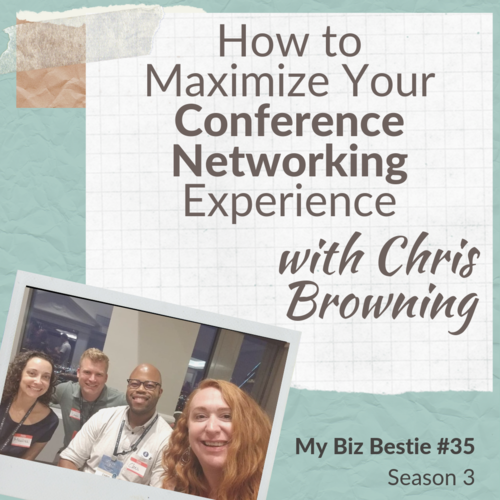 Biz bro, Chris Browning, joins Maelisa and Amber in this live interview from the Podcast Movement conference. Chris hosts Popcorn Finance, a podcast which gives financial tidbits in about the time that it takes to make a bowl of popcorn. During this super special interview with everyone’s favorite financial guru, the biz besties pick Chris’s brain to learn how he maximizes his time at conferences. Although Chris hasn’t been to that many conferences he has learned how to get the most bang for his buck. Listen to this episode to hear how to up your conference networking game.

How does an introvert push through to maximize his conference experience?

Chris is a self-proclaimed introvert and an INFP. Even though he can sometimes get stuck in his own head, he knows how important it is to network at conferences. Chris first met Maelisa at the airport on the way to FinCon. He spent about 10 minutes internally debating with himself about whether or not he should go talk to her. Thankfully the networking side of him won the debate and he ended up becoming a biz bro. Chris thinks that networking at conferences gets easier as time goes on since people open up more. Listen to this episode to hear how hearing yes makes conference networking easier.

TWEET THIS: LISTEN TO THIS INTERVIEW WITH CHRIS BROWNING @POPCORNFINANCE TO HEAR HOW TO UP YOUR CONFERENCE #NETWORKING GAME.

How to maximize your time at conferences

When Chris went to FinCon he expected to attend 6 sessions, but he ended up meeting so many people after he got over his initial hesitation. He ended up doing 13 interviews for his podcast at FinCon over the 3-day conference. Chris realized that conferences are a great way to expand his network since he gets to meet so many people face to face. Chris loves the fact that he can meet people in real life and read their body language which is impossible online. Listen to Chris’s tips on how to maximize your time at a conference on this live interview from Podcast Movement.

How did FinCon change the trajectory of his show?

Chris’s experience at FinCon actually changed the trajectory of his podcast. Before that conference, he had only done 2 interviews on his show. The process of interviewing people was completely new to him. But after doing 13 interviews in a row he became more comfortable with the format. It was like a crash course in conducting podcast interviews. He felt that interviewing people in person helped give him a better feel for how to hold a dialogue with someone on his show successfully. You can’t read people well over the internet, so interviewing people in person gave him an advantage of being able to read their body language as he asked questions. Listen to this episode to hear how Chris learned how to interview people on is feet at FinCon.

Did his previous conference experience shape his expectations?

At FinCon Chris Browning knew that he wanted to attend several sessions. But instead, he learned to network and talk to people. He came into the conference knowing that he would get so much value from networking and talking to people. Chris wanted to make connections and realized that he may get more value from networking at conferences rather than attending as many sessions as possible. The sessions are great, but the connections made by conference networking is even greater. Listen to Chris’s conference experience to hear how this introvert made the most of conference networking.

Connect With Maelisa and Amber

Subscribe to My Biz Bestie on iTunes, Stitcher, iHeart Radio, or Spotify